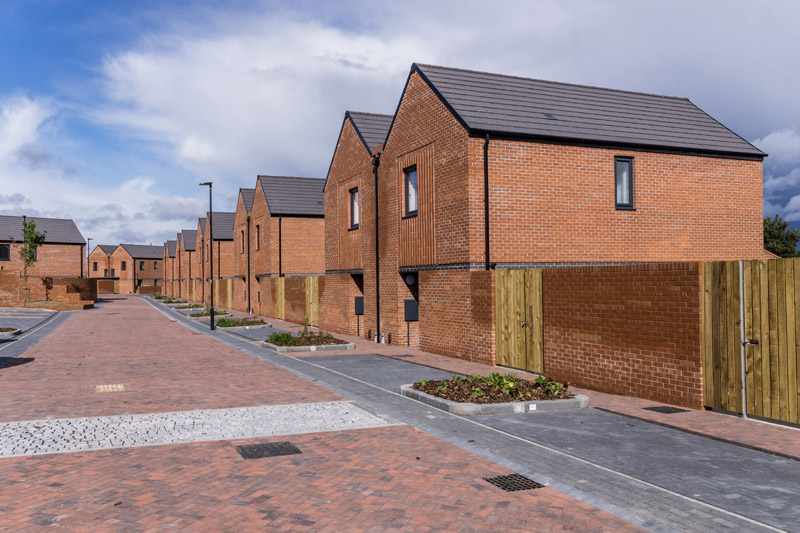 Project Description: A development of 20 x 3 bed houses and 8 x 2 bed apartments all for affordable rent.

However, and once getting into the detail, it soon became apparent that underlying technical challenges were lurking ahead of us.

Our initial tasks involved the site strip, new sewer connections, extensive attenuation drainage, forming part the new access road, and to construct new retaining gabion walls, it was quite clear to see that without carrying out these major groundworks first, it would have been extremely detrimental and near on impossible to do later in the development, not to mention forming a vital part towards the success of the works programme.

Once out of the ground, works were more of a traditional build, although we had to overcome specialist retaining wall and waterproofing details where certain plots were ‘back to earth’ as well as getting a specific feature brick panels constructed to each front and rear plot elevation.

Access for deliveries proved to be difficult throughout the project, particularly due to the long narrow access road and single access only, and to hamper works further, the wet winter forced us to work within what could only be described as a ‘one foot deep, mud canal’.

After overcoming a range of heavy issues, we can now step back and state ‘we did it’ but what a job…..

Our Client SYHA and other related partners are very pleased with the end development particularly and since it has been a long drawn out affair from initial planning discussions several years prior to commencement.

The new scheme has been called ‘Slingsby Place’, in tribute and to honour Dot Slingsby who was a very influential member of the public, in the Manor area of Sheffield, Dot formed the local youth group, ran luncheon clubs, partly ran the Manor Tenant & Residents Association and sat at the Manor Assembly meetings, so to recognise her achievements, it’s very fitting to use her name in her ‘Manor’.