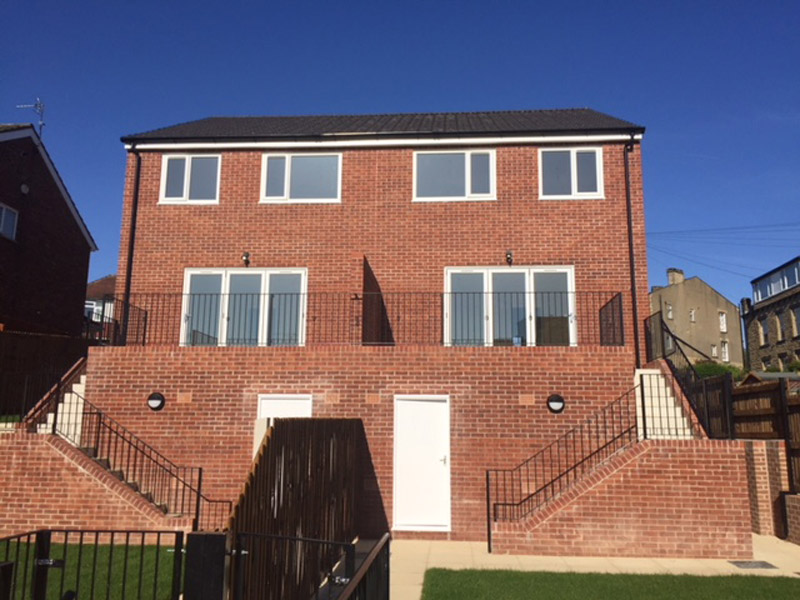 The site was formerly a Council owned block of 15 garages, complete with associated car-parking on a relatively steep/tiered slope, the garages were badly maintained and in a poor state of repair, harbouring social un-desirables, who were lowering the tone of the surrounding area through their anti-social activities.

Our client purchased the site, and consequently obtained planning permission to build 2 houses.

Much of the former garages were demolished, however the lower 4 garages were retained to become part of the final scheme.

Due to the steep nature of the site, levels played a huge challenge in accommodating the plots, there foundations, drainage and general construction.

The roof of the remaining 4 garages became a garden sun terrace, and to maximise voids created by building on the slope, these were made into storerooms/garden workshops and above these were additional sun terraces which were accessed via external stairs or the by the lounges bi fold doors.

The final product provides a reasonable sized garden across the front elevation, down the sides are steps and paths to deal with varying level changes, which lead to a lower private rear garden area.

By utilizing one of the former garages (middle one) at the lowest level, a new concrete stair was installed to access from lower levels to the lower terraces and ultimately, the rear of the dwellings.

The garages are accessed off Land Street for vehicles and pedestrians.